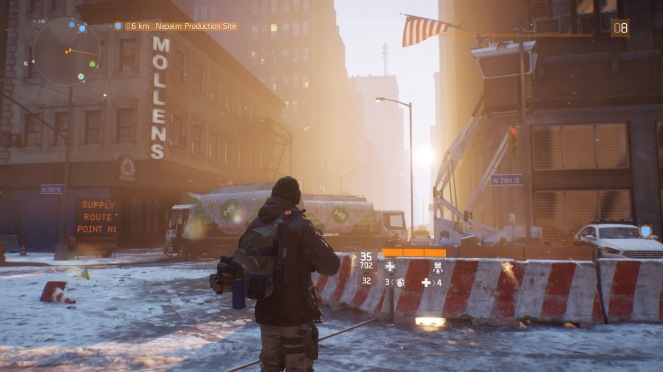 New York’s streets are still. Cars are haphazardly discarded down the concrete veins of the city. Wall Street’s stock ticker is blank. The Division’s New York is one where anti-vaxxers won. Rather, it could be. Instead, the “Dollar Flu” killed people, named as such because the pathogen was released on Black Friday, a stroke of grisly megalomania meant to break consumerism’s leash on American society.

In this set-up, forty one people must be shot and killed before The Division explains who or what The Division is. Even then, the slow thumbtacks-and-picture-board exposition style remains obtuse. The gist: Division are people who wear orange LEDs on their shoulder and wrists. They’re a government faction, a clean up and containment crew of sorts.

Whoever they are, they have the right to shoot people. A vocal computer AI calls out bad people as targets. Markers aim predominantly at people in hoodies, UbiSoft socially blind to the real world stigmas they’re perpetuating. Then they make The Division’s government-led vigilantes equally villainous. Men in hoodies are killed for looting dead bodies; Division members loot their victim’s corpses. No one comments on the ethical paradox.

Videogames have often been thin in their excuses to shoot things. Often they’re dumb. “Aliens!” they shout. Maybe a videogame reenacts historical conflict, anything to incite the most basic of interactivity’s simplest action – a trigger pull. The Division, while as stupid as many, is insultingly so.

People are suffering. They beg for water then drop a gun in an exchange. Citizens are held hostage even though there’s an assault rifle in the room with them. Division members are trained, but are confounded by sniper rifles deemed level 11 if they’re only level 10. Some people absorb 3,000 headshot damage, as if one headshot damage is not enough. Villains pair themselves off into groups, as if they joined together and decided some would tout flamethrowers, others grenades, and the lessers, riot shields. Lackeys receive a baseball bat and charge hopelessly toward the Division who wield assault rifles. This is meant to be ignored, made to be equivalent to accepting a blue hedgehog who survives on rings.

The Division carries the qualities of an alluring third-person shooter, inserted into the framework of a catchy action RPG. The latter genre often swoons for the allowable inaccuracies of fantasy or science fiction. Diablo has hidden treasure chests, but demons guard them. Destiny pits laser rifles against one another as if Star Wars leaped into another universe. Incongruities are swept aside; oddball happenings are explained away by the nature of implausible fiction.

The Division isn’t implausible though. The fear factor is designed to be persuasive – viral outbreaks, economic breakdowns, and looting. Panicked 24 hour news cycles are sprayed across the screens in Times Square. Story threads portray a diverse population meant to elicit contempt for blind consumerism. This comes packed into an accurate digital reproduction of New York. Lighting and steam effects are stellar, relentless in their authenticity. Certain gameplay concessions are excused as a necessity for the medium, say instant health packs. They’re almost plausible.

Yet, what’s contained within the corridors of skyscrapers and landmarks is turned hollow by incessant idiocy. If there remains a public facing side to the medium’s immaturity, it’s a swatch of dissociative, silent protagonists and the idea that nothing can ever be taken seriously. So The Division stumbles for an arduous 40 hours (UbiSoft’s defining factor: They refuse to respect your time), asking players to scour for better knee pads to shorten shotgun damage to the chest.

In this mega-budget space, we’re too quick to let slide the goofy and wonky. Memes gleefully joke about Last of Us’ ammo boxes only giving two bullets, while ignoring how artificial this make the tension. Never question, because it’s just videogames, stupid. Division makes memes for days. Dankey Kang, but with viruses and hoodies. 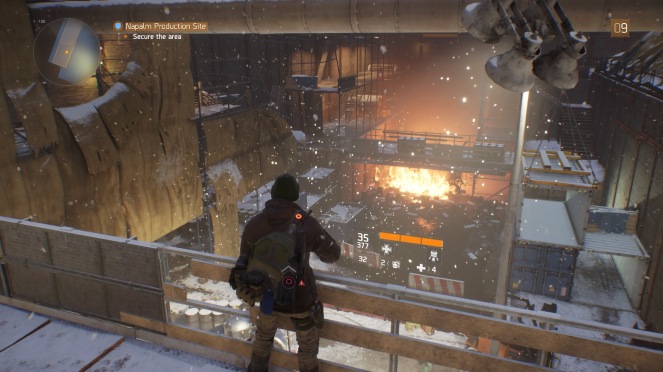 Tom Clancy’s name remains marketable. Usually, his work captured America’s enthusiasm for souped up espionage and military tech. Right wing power fantasies yes, if infused with a specific sense of character. Division, by contrast, can be lonesome. Its action is wanting.

With a single soldier, the power fantasy is relentlessly over produced. Ambient quotes lavish praise on a man or women with a gun. “I don’t know what would have happened without you,” or, “My bets on you,” pandering to a sensational degree.

There are supposedly thousands of Division members active. Unless warranted, there is no need for any but one. The lone soldier can save New York and thus the world, making a joke of the server-side connection The Division so demands. Clancy’s name sits atop the marquee, yet was an author who comically struggled with integrating internet into his fiction. Now his name posthumously is used to sell software which requires a connection.

Two critical notes: The Division is more fun with friends, but so are the worst videogames. That’s a reason to have friends. Second is leveling, also notable in the worst videogames. Nations are turning leveling into a sociological experiment as a control system. Division’s application of the idea remains dumb, putrid, and impossible to justify. This stupid, stupid videogame, adapted into a frame where it does not fit. At least if this were caused by anti-vaxxers, the dumb would be suitable.