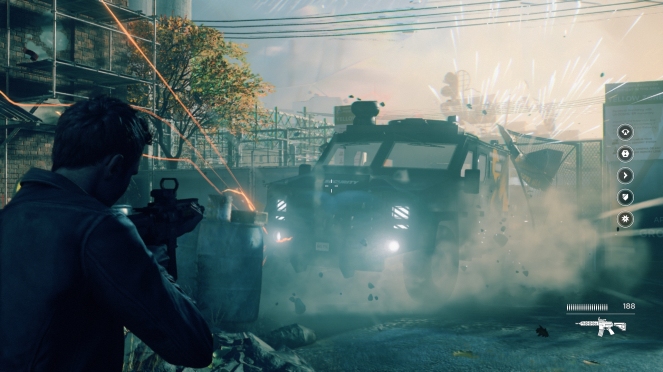 Quantum Break comes from two different places. First, it falls into a surge of time travel pop culture, inundated with the likes of The Flash, 11:22:63, Looper, Predestintion, and in this medium, the exquisite Life Is Strange. Quantum Break is also in on the binge of post-recession distrust of capitalists, entertainment which casts corporate figureheads as selfish, maniacal authoritarian rulers. Capitalism becomes a sort of abscess which must be cured in these scenarios

As such, Quantum Break casts soon-to-be-superhero Jack Joyce, an everyman in plain jeans and a jacket, to thwart the plan of Paul Serene’s technology conglomerate, Monarch. This blender approach to its fiction leaves Quantum Break handicapped, ailing more so when bitten by the need to shoot people ad nauseum.

Through its fiction, Quantum Break becomes a thoroughfare of ideas. Time is cast as a disease, an interesting parallel if not necessarily acted upon. The game is butchered by its derivatives: cover-based gunplay and wasteful platforming. To Quantum Break, time is treated as kitsch, giving Joyce superpowers which merely have “time” stamped in front of them. Time Bubbles, Time Dash, Time Shields; they have little or nothing to do with time nor how Joyce is able to manipulate its properties.

In the opening moments, Quantum Break spends 15 minutes to define three characters, their relationships, Monarch itself, and high-grade quantum physics. Afterward, it’s a sprint – 45 minutes spent shooting people, of which Joyce immediately asks, “How many of these guys are there?” The question is fair, if overused as a sort of fourth wall acknowledgment that video games shoot too many people.

It’s interesting that Quantum Break is representative of Microsoft’s TV-in-the-game-console approach to a literal degree. By embedding live action episodes within the narrative, Quantum Break turns into a victim. TV segments railroad the passive character delivery seen in the interactive bits.

Decades of growth (building into a golden age for television drama) shows maturity and caution in each aspect of the live production, leaving videogame portions feeling like an immature blunder. TV Quantum Break invests in character and patience with a smart editing economy. Videogame Quantum Break withers under moronic hide-and-seek story beats. Narrative development is disposed of via open laptops. ridiculously exposing private emails. Maybe you find them, maybe you don’t. This is no sensible approach to world building

Thus another medium is tasked with telling the sci-fi side, as if the cautious, by-committee approach to high-budgeted videogames has rendered them incapable of such. Quantum Break’s time travel, like nearly all time travel before it, is befuddling and hole filled. That’s expected. However, at the center are characters and full arcs, each of which is told in live action.

Jack Joyce, absent for much of the TV episodes, never grows beyond an empathetic man with a gun. Those featured in the show are given families, purpose, and the ability to move beyond their archetypes. Whether predictable or not becomes mostly irrelevant; there’s emotion evident whereas the Quantum Break’s interactivity is concerned with leveling up non-time time powers and introducing new armored foes. 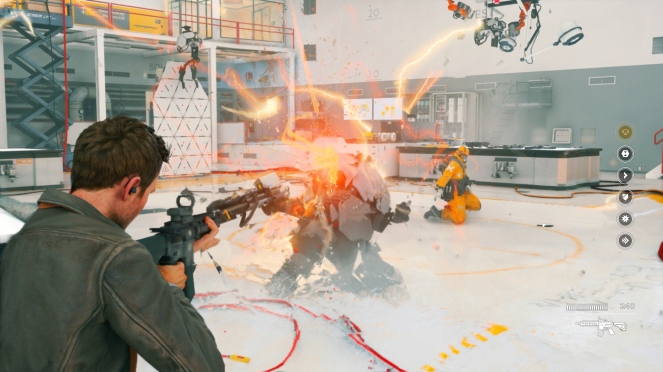 To be sure, there is a heavy dividing line between live action and gameplay. Characters feel indebted to one or the other rather than treating Quantum Break as a continuous story. It’s odd. Episodes build Monarch’s employees. In-game acts tell the heroic side. What generates is an unusual compassion for Monarch and a disturbed, unrelenting world view for Joyce. In the final acts, attention then swerves to a schizophrenic Paul Serene (Aiden Gillian) who succumbs to his own mad plan.

Further, live action discusses the nature and necessity of killing. Videogames, traditionally, treat their gunplay or fisticuffs as necessary tenants of good/evil conflict. Quantum Break does nothing different. Liam, Monarch’s private hitman, comes to terms with his role, humanized by the realization of family early in the episodes. Joyce kills because he, quote, “handled a gun once.” How banal.

Walking away from Quantum Break doesn’t elicit feelings of groundbreaking scope or innovation, rather a sense of giving up in the AAA space. So long has the industry been content with assault riles and chainsaws, games have crawled into a sheltered creative corner and another storytelling medium has to come in to reveal their idiocy. Videogames at this level are terrified of showing narrative patience. Time saved by not telling a story is wasted by wearing down players with mindless jumping puzzles and sixty identical gunfights.

It’s not coincidental that you can skip one-off story episodes with a press of the B button, but not gunfights after the first thirty.