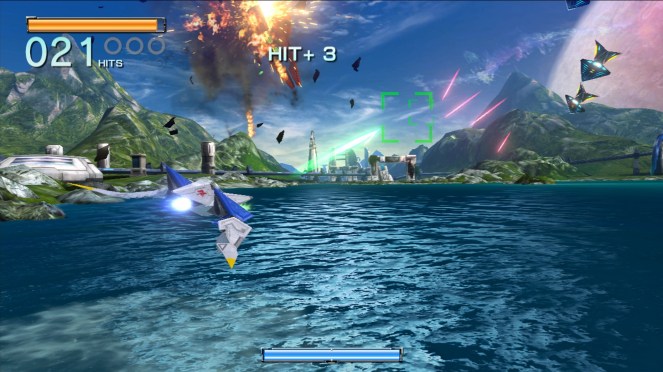 After the new millennium, Star Fox became Nintendo’s Sonic – a once glorious, company-defining series which went astray as the home studio was helpless in finding contemporary relevance for their mascot. Shigeru Miyamoto’s perky puppet show collapsed under inane ideas, needless utilization of console features, all while drifting further from the surreal ’60s-like sci-fi trappings of its origins.

It might be a polygon problem. Super FX powered, 16-Bit StarFox’s (then without the word spacing) minimalist edges and hard shadows looked primitive, evocative of rushed television miniatures in Thunderbirds. Even into StarFox 64, those smeary textures bled like hurried paint applications. As Fox McCloud grew as a hero (visually and thematically), the series’ lifeblood drained. With more polygons, features, and differing action, the less StarFox felt like StarFox.

As Arwings first drop to Corneria, their wings skimming the surface, a triumphant heroic theme thumps in the background. Star Fox Zero feels like a blessing. Zero’s reset of the series’ lore feels genuine and the panicked, haphazard single stick shooting is distinctive in arcade simplicity.

Then Zero misses. Like StarFox Command on DS, Zero’s status as a joyous throwback whittles under nonsense controls. Now it’s unmanageable. Zero exists not because of developer’s Platinum creative spark, but instead, because Nintendo is confounded as to how to sell their hardware. It’s not Star Fox which lacks relevance – it’s the Wii U’s features. For Zero to work – and it doesn’t – eyes and ears needlessly swing focus between a TV and GamePad. Darting eyes and shifting focus drown a light story of Fox’s redemption which tethers to the simple themes of classic StarFox – redemption, teamwork, and courage.

Nintendo did this with Kid Icarus, holding their angel back for decades before pulling him back into service as a justification for a touch screen. Here’s StarFox, err, Star Fox, fitted with nonsense dual screen motion control schemes. After four years. Nintendo still has no idea why they included a GamePad with Wii U, short of believing kids are forever linked to any tablet device. Zero is thus frustrating and noxious. Even at an appropriate length, Zero is also stuffed with repetitive fat; a trio of aerial battles play identical. It is one part brilliant, yes, but derailed (with force) by a studio lost in their stubbornness.