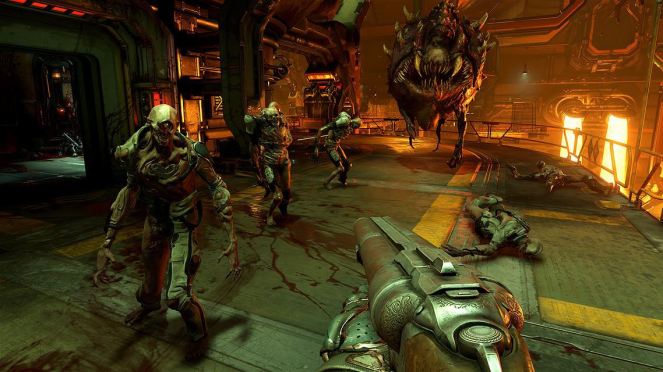 You stay alive in Doom by killing. Anything dead drops ammo and health, creating a consistent pressure to kill faster. All of this excess is glorious.

Doom is dumb. Always has been, even when distributed through floppy discs or 24 baud modems. Doom assumes the grand American craftsmanship of a double barreled shotgun can wipe out the unholy citizens of Hell. Shells meet demon; shells win. Action is grungy and aggressive, placed over a hard bass line and gratuitous metal. Many of the images seems like a death metal band’s album cover.

It would be inappropriate to release Doom outside of the summer season where the emptiest of entertainment lies. The violence creates a relaxing catharsis, a crude one, anyway. Bloodied chainsaws and casually utilized rocket launchers leave the screen a persistent red. It has little do with the settings of Mars of Hell – blood smears the first-person POV.

Empty and crude as Doom hopes to be, it’s not entirely brainless. Lost in the clustered rooms of spawning demons sits a crafty left-leaning satire of business and religion. The privatized corporation who settled Mars splurged on its Argent energy resources unabated by regulation, while a cult bubbled from the inside. They brought religion to work and weren’t just inviting the heavens.

Argent energy wasn’t profitable enough, so UAC discovered a portal to Hell and decided to weaponize its denizens. What’s left of UAC’s facilities are devastated. Over 61,000 died because of inept leadership digging for profits. Now it can all be saved with enough ammunition.

Barely functioning, UAC’s Martian habitat runs on holograms asking you to speak to Jennifer in HR to ensure you have dismemberment insurance. Those indoctrinated to the weaponizing cause have been given special awards. Their digital plaques hang in a specialized room. Meetings for those against the plan to give demons rocket launchers were scheduled to meet in a church. It appears the meeting never took place or the dissenters were greatly outnumbered.

Mars offers direct access to Hell. Portal whisk the ambiguous Doomguy into the rocky, acid-filled underworld. Hell works identically to Mars – colored keycards are replaced with skulls. Rooms unlock when cleared of infestations. Even layouts marry the inhospitable landscape with the corporate interiors, creating a comically dark synergy between working for privatized institutions and living in Hell.

Doom brings classic stage designs back to the forefront. While open worlds fill themselves with baseless activities, the laser focus of Doom means levels carry their own identities. In conjunction, they form their own narratives, too. One leading to the reveal of the iconic BFG-1000 turns the weapon’s access into an event. The BFG’s home is an entire sub-floor, as if the creation should be worshiped for its power, further accentuating the satirical bond of religion and profit.

Classic Doom necessitated escape and survival – eyebrow-shifting Doom Guy drops to Hell and must get out by shooting things. New Doom (a fitting moniker) burrows into the same framework. Point A meets Point B. Do so with ridiculous speed. Story interruptions – a reprieve from sometimes tedious gunplay – then layer on satire. Doom is then given a boost and morphs into this way-better-than-it-should-be form, becoming as insightful and comic as it is perversely violent.

Doom was difficult to defend as a surge of political groups chewed on its violence in the ’90s. Developer id created a lavish tech demo which happened to birth a genre. Context wasn’t there. This Bethesda-published/id developed Doom mocks conservatives who lashed out what they didn’t understand, blasting their anti-regulation and pro-Christian viewpoints. Doom has become a stronger anarchist than it once was. While lacking the high-tech bravado which came with the advent of 3D, this Doom better places itself within culture satire and shows off while doing so.