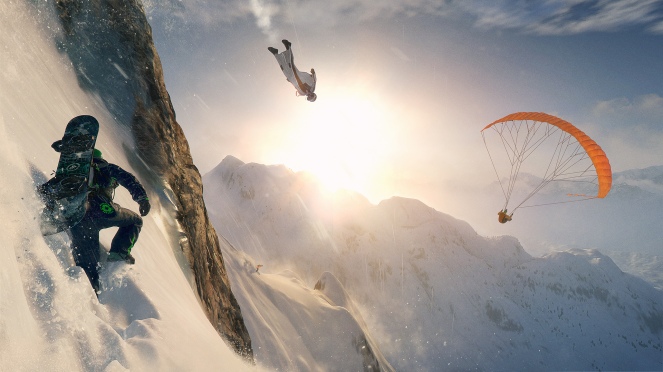 If Microsoft won’t bring back the rowdy Amped series and EA thinks SSX holds no contemporary value, then what’s left is UbiSoft’s Steep. This scenario isn’t a strong one.

Steep isn’t dreadful. In fact, fragments of Amped (lightly eccentric extreme sports culture; the appeasing of magazine editors) and SSX (the identifiable if shrunken trick system) coalesce in the unnecessary open world, the only thing UbiSoft allows their studios to do based on their recent output. This, all while locked into the world with other players because UbiSoft demands a server connection to play.

The lingering question of “why?” hovers over Steep. The game is partially a high score chase and on the other side, a run to grab a virtual audience, one without any visible or audible representation. Just know the random guy in your ear – a slightly higher pitched Danny DeVito sound-a-like – tells you you’re popular. The self-created skier, snowboarder, parachuter, or wingsuiter jumps from location to location, mission to mission, test to test, all without any overarching purpose. Steep suffers a personality deficiency, and it’s an incurable case.

Mountain peaks have more charisma than anything, rambling on in dream-like monologues about their features, introducing themselves as mighty formations or playful beings. It’s sort of clever, but disintegrates past their introductions. Same goes for all of Steep, really beautiful initially, like an IMAX or Nat Geo documentary, but without their powerful context.