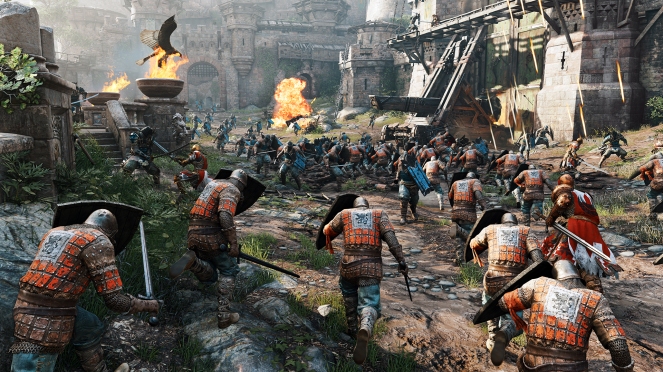 Like an internet argument turned videogame, For Honor pits vikings, knights, and samurai against one another. Although SpikeTV tried the same thing with their show Deadliest Warrior, UbiSoft takes the premise into a dull, vapid tale filled with muscular combat. It’s Dynasty Warriors by way of a western studio, and a prime example of how action differs between cultures. One is Arnold Schwarzenegger, all brawn, slow and bloody. The other freeing, creative, and even whimsical – like a Jackie Chan movie, cute, but superficially violent only as necessary.

These games need colorful decor. For Honor thinks decor means rolling heads and blood trails. Yet, sliced off heads come in such quantity throughout For Honor, it’s a boring exercise in aimless murder while each side wonders if their methods are righteous. They’re not, to be clear. Each culture (of what limited culture For Honor shows) offers a singular answer to the problem – slice through hundreds of people repetitiously until none remain, unchanging, aimless, and for hours. A back-and-forth rock, paper, scissors approach to battle doesn’t change the result. It’s slow, sword-driven power, drawn from a belief in American superiority above all. Nothing can beat piles of improbable armor or sheer force.