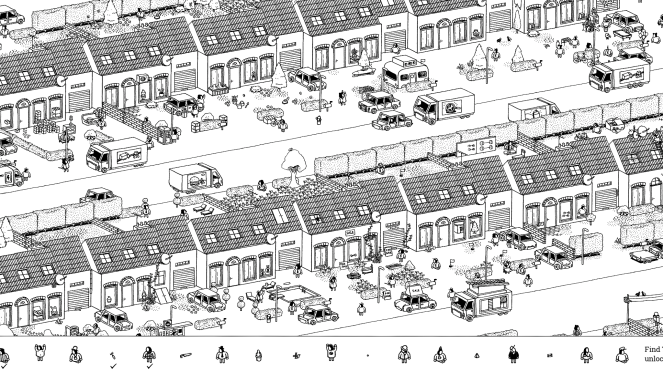 So many adjectives fit this delightful little gem. Hidden Folks isn’t more than a miniature handheld plaything, like a stress cube on a touch screen. Yet, the special outpouring of personality within the design acts as a signature – the Amsterdam-based dev team playfully speaks through their work.

There’s nothing to do in Hidden Folks. If you wish, you can stare at the primitively rendered people as they work and play, maybe poke a tree or flick a bird away on occasion. There’s no pressure and only mouthed sound effects if left on its own. Frame it and you have living wall art.

There’s no reward for finding the listed and hidden items other than a wacky sound. Infantile, in a way, childish in another, but so flush with identity and artistic creativity as to leave something memorable each time a finger presses down on its little scribbled world. A game meant entirely for touch screens/iOS, because the feeling of interacting with these charming towns isn’t the same as pointing and pressing a controller/mouse button. It’s needs tactile feedback of its and your own doing.

One thought on “Hidden Folks (iOS)”