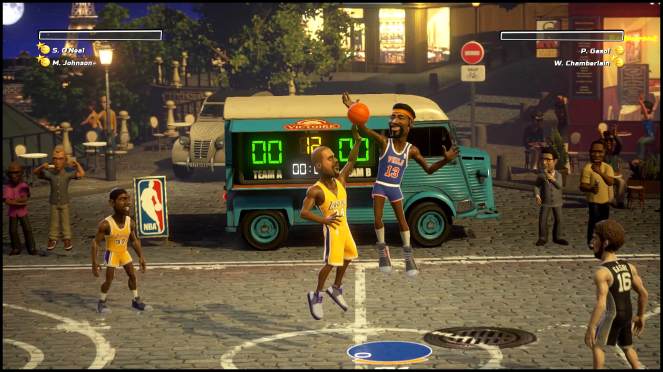 The 1993 NBA of NBA Jam is not the 2017 NBA. Midway’s basketball icon came into existence with the on-court physicality of Dennis Rodman, Charles Barkley, and Bill Laimbeer. Fouls were harder, and NBA Jam captured that not only with foul-less pushing and players ending up in the crowd. No, NBA Jam used rigidity. It required reaction at the expense of finesse – NBA Jam forced hard play.

So NBA Playgrounds better mimics what happened to NBA Jam later, mostly as clones and Midway’s own copycats critically languished. By the late ’90s, with the NBA trying to find its footing in a post-Michael Jordan era, Midway ushered in NBA Showtime. Again, like NBA Jam, but not. Showtime, with clean, corporate NBC branding (and awesome theme song) delivered a softer NBA. Pushes were lessened, rigidity was gone, and with it, the panicked intensity of a videogame great.

The NBA further changed in the intervening years. Here sits Playground, slower, more reserved. Forget precision or control – NBA Playground’s stars refuse to take a simple jumpshot, instead targeting the rim with an under-the-leg, 360 degree spin layup. Fancy, but also imprecise and unnecessarily difficult to manage with the timing-based shooting. Everyone wants a place on an internet highlight reel, diluting the actual game. Its systems sway between illogical and nonsense. NBA Jam had fire; NBA Playgrounds has unfairly random power-ups, most useless. Attempting a steal gives no movement penalty. Pushing is considered so severe it drains turbo and the power-up meter. Players unlock only via cards and teams freely mix, inherently causing an imbalance.

As much as Playgrounds tries to invoke a ’90s-like aesthetic (big heads and borderline stereotypes watching courtside), the resulting play doesn’t have an energy anymore. If it’s “arcade” basketball, then it lacks an edge and pace which defined quarter-taking cabinet games.

It’s odd because the NBA today – even minus the elbow-swinging and flagrant fouls for the sake of flagrant fouls – is a league sold on its exactness. A Steph Curry three is as likely a candidate for ESPN as a LeBron dunk; the NBA wasn’t like that before. If the contemporary NBA needs reduced to its simplest form in a nostalgia grab, then NBA Playgrounds has the idea. The execution though allows for neither memories of NBA past or relevance to NBA present.