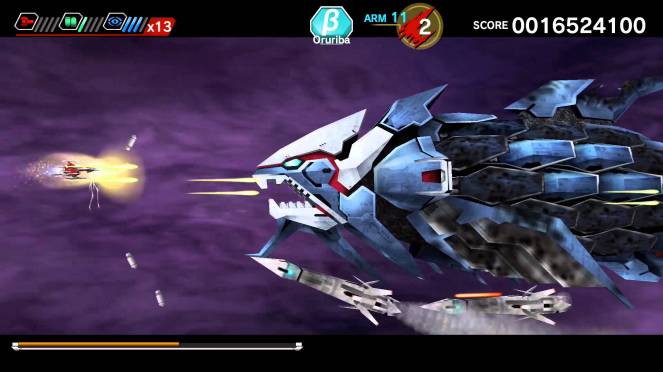 Darius though, now and in its past, does this with brilliant vivacity. It’s a jumble of influences, from a soundtrack mixing jazzy horns, operatic vocals, and chiptunes, to its enemies, caught in a fervor over Japanese mecha merged with Tokusatsu. The pairings make less sense in motion than it does even in text.

Whether disillusioned with logic or not, Darius has an identity. It’s impossible not to know Darius once you see it – a cavalcade of giant robot fish monsters and the lean, attractive forces of good, known as Silver Hawks, who will shoot them out of space. Were Darius human, a face tattoo wouldn’t be out of place; anything worthy of expression suits Darius.

While home studio Taito blitzed arcades with their shooters in the late ’80s and throughout the ’90s, the once seemingly innocent Darius grew and led to this contemporary take. Name another Taito shooter with such lasting attributes. Despite their high quality, you can’t. They all lacked salmon robots.

In its purest arcade form, Dariusburst sports multiple screens and a sit down cabinet with subwoofers so powerful, there’s a want to ‘splode the next end level boss. At home, it’s one screen, stretched to an elongated aspect ratio (2.76:1, if not more) equivalent to 1959’s Ben-Hur. But, Ben-Hur never challenged giant enemy (robot) crabs or slayed thousands of puny forces attempting to steal away the galaxy. Dariusburst is delighted by the possibilities of that concept. It does so with staggering energy with a ceaseless output of explosions and color.

Dariusburst is a shooter, yes, but no others like it exist.