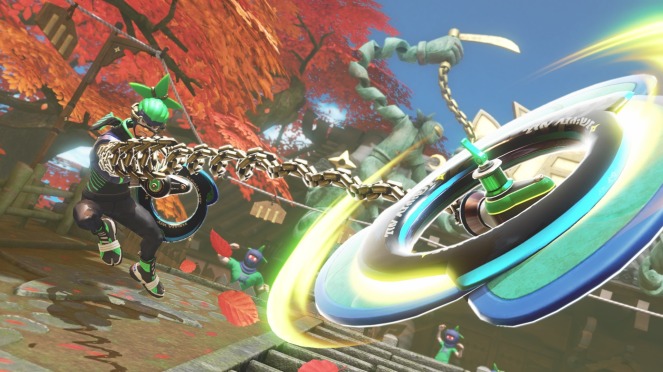 Arms’ arenas sport padding on the floor. Like gym mats, covering the ground as if the Arms league’s primary concern is falling down rather than combatant’s missiles-for-hand gloves. This is clearly not a regulated sport.

Arms and Nintendo’s inky splat-fest Splatoon must be from their same universe. Their vibrancy and kinetic theme music indicate a plausible connection. Both also feel like an advancement of late ’80s/early ’90s Nickelodeon game show Double Dare. Families who entered subjected themselves to ridiculous acts to win prizes. It’s possible Double Dare had a sort of slime/paint challenge where contestants needed to paint an area with goo or like in Arms, use those novelty boxing gloves on extenders to knock something over. Nintendo’s Double Dare duo; that’s now what they are.

Tactically charming, Arms hides a fighting game complexity. It’s illogical and conceptually inane, but like watching some late ’80s family cover themselves in goop to win a cheap vacation, the execution overcomes the absurdity. Arms teaches the concepts of distance and timing, crucial to long-standing fighting games.

Oh, and do the combatants have actual arms, or just springs? People cheering in the arena, they have arms. This isn’t a world where humans evolved without flesh appendages. One of the boxers is a mummy. Imagine the process of wrapping him.

Maybe part of Arms is Nintendo’s boxing opus Punch-Out. The evolution between these games is a natural one. Both games reward patience and timing. Both are boxing games too, neither with any pretense of realism. Arms only needs a story of a scrappy protagonist rising through the ranks like a bouncy-armed Rocky Balboa. That Arms doesn’t have, leaving behind a slightly empty bit of world-building. That or Splatoon already handled the lore and we didn’t know it.