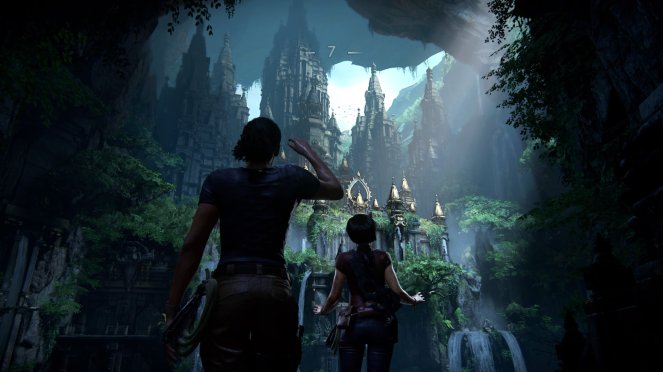 The missed opportunity in Lost Legacy is not letting Chloe be her own character, and by extension, containing Uncharted to a series of familiarity. Chloe’s previously cryptic motivations, a bit part in the larger Uncharted series, take on weight in this spin-off. But, she’s still Nathan Drake.

Chloe’s saga pairs her with a roughened Nadine, another series bit player, as they rummage through India’s religious mythos. What’s set-up is a buddy movie mismatch and jungle adventure, with the morbid undertone of Thelma & Louise – with significantly more violence and murder.

Chloe is Nathan Drake. It bears repeating. A fast-speaking, quip-dealing artifact hunter with childhood problems; she’s not particularly interesting, the “female version of” cliche in a series often overshadowed by its male power figures. Partner-in-scavenging Nadine breaks with Uncharted convention, tough-mouthed and played with a villain-like blankness. She speaks of logic, rare in Naughty Dog’s series; Chloe still speaks only of thrills.

This allows Nadine a clean character arc, if one based on Hollywood convention. An argument between the pair over withheld information is followed by a thunderstorm with torrential rain and gray overcast. The trope isn’t tiresome, it’s old-fashioned, but then again, Uncharted plays into its own rudimentary Hollywood story en masse. It’s less Indiana Jones than it is Jewel of the Nile and King Solomon’s Mines. And, always with a wink.

Uncharted’s formula stays intact, whether through fear of change or fear of marketplace reaction. It needs noted that Lost Legacy is a cleaner Uncharted. Unlike Uncharted 4, Lost Legacy parses its fat (excusing an unnecessarily long fourth chapter) for a better paced quest, still improbable in the extreme, if devoid of late game mysticism. Lost Legacy finale act narrows in on financial greed by way of stolen culture. For supposed DLC, Lost Legacy seems charged to exploit the series’ main thematic curve, or even acknowledge it. Uncharted has heroes, but cultural anti-heroes at best. Everyone is in it for the same end game.

By its closure, Lost Legacy turns into the rollicking, raw action nonsense expected of Uncharted. The finish may borrow its prowess from Uncharted 2, but it’s the best part of Uncharted 2, sprouting technical muscle while strengthening Chloe, the character. Any doubts she can hold her own against Drake – as if not apparent from the litany of climbing and clambering earlier – dissipate. Making Chloe a feminine duplicate of Drake turns them equal, leveling off Uncharted’s masculine presence a touch. There’s a positive in doing the same. Still, it’s a shame that with the opportunity to re-write or re-cast Uncharted’s tropes, Naughty Dog gives this to a B-team, their work an affectionate nod to the series as a whole rather than a quiet, ambient, and character-rich success like Last of Us: Left Behind.