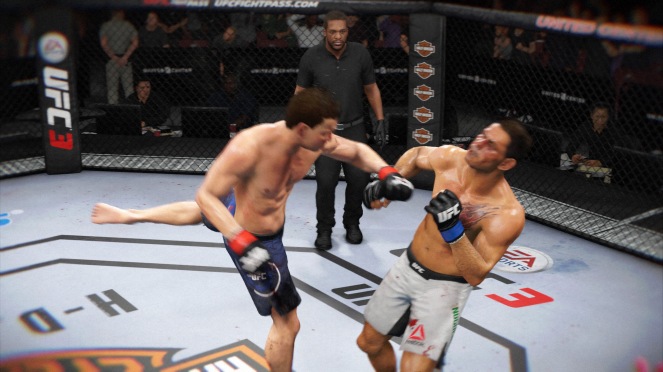 EA Sports UFC 3 is rated T. That’s low. The extended reality of UFC 3 isn’t comparable to a giant hit in Madden; those happen inconsistently. With the added reality of physics and grimacing faces, UFC 3 offers a grisly reality, more than the hoary splatter of Mortal Kombat. The sensationalized realism of UFC 3 makes thundering, concussing blows the norm. Sound, impact, and cheers create a flurry of adrenaline.

MMA is a sport punctuated by seconds of hyper violence. A kick lands just right. A punch clips the jaw on point. In videogame MMA, every hit lands with knockout force. Technology shows skin rippling and hair swaying. Sweat or blood splatters, adding a grueling cruelty to the already gladiatorial-like combat.

There are few consequences to any of this either. UFC 3’s career brings on an up-and-coming fighter through ranks. Incoming fighters scrape by for dollars in front of tiny crowds. Most seats remain at rest. Rundown arenas look cold and mildewed. Benefits are probably not worth it for most, and numerous more couldn’t afford the gym fees, let alone an injury.

Career money is sparse until popularity and success meet. A longevity meter sets a career limit, but it’s only a meter. UFC 3 deals in general spectacle, something for the beer swillers in the crowd who come to see dudes KO one another. Hopefully, the mega hit is enough to be part of an endless highlight reel. Everything else is invisible to UFC 3, including the training grind. That’s done through a menu system, getting to the fighting faster, reaching that spectacle without patience or drive. No dangerous weight cutting, no skimpy diets; UFC 3 wants those punches, wants them bigger than life, but without any reasonable consequence.