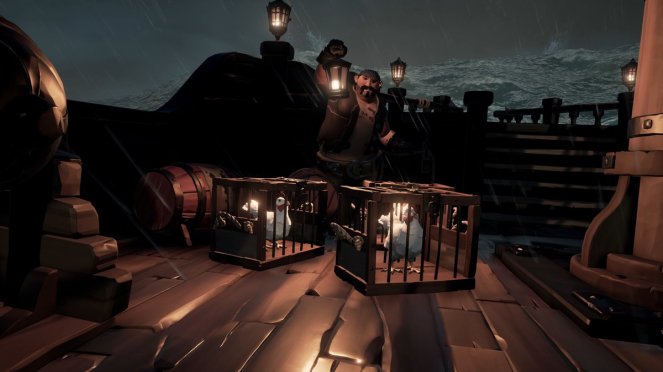 Sea of Thieves joins a new genre – the spectator game. It’s one where players experience Sea of Thieves through a bevy of shared .gifs, YouTube videos, Twitch highlights, and social media posts, then spend hours in the game wondering why none of that cool stuff happens to them.

Reality says that Sea of Thieves is a bundle of spaces where something neat might happen in any of them, but more than likely, it’s a trudge toward nothing. Pirates exist in entertainment as tropes. Cannonballs, eye patches, peg legs, Johnny Depp; Sea of Thieves has those (minus Johnny Depp) but then adds miles of beautifully rendered if pointless ocean waters. That’s the stuff Treasure Island and Pirates of the Caribbean left out, and for a reason.

There’s a promise of skeleton wars and ship-to-ship combat. Sea of Thieves will likely break both of those promises in any given session. Worse still, Sea of Thieves promises to be a Rare game. In the sense of its soft artistic aesthetic, it is (outside of the realistic water which doesn’t fit). In the sense of Sea of Thieves carrying the studio’s lauded personality, it doesn’t. Sea of Thieves is beckoning for a story, a connecting point, or their wit-sharp dialog. But instead, it might be out there, waiting to be found by some, but not all. Others will make their own fun, then share it. Others will just watch, and watching cuts out the fat. Might as well just browse Twitter for the Sea of Thieves .gif highlights.