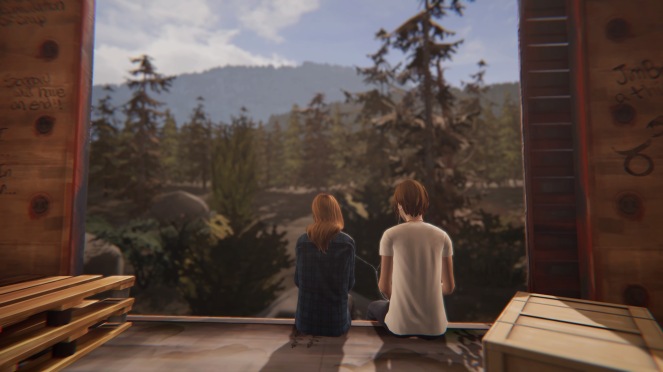 Before the Storm removes Life is Strange’s time travel safety valve. No longer do sci-fi trappings assist in the decision making. Before the Storm deals exclusively with emotionally resonant drama in telling its story.

Protagonist Chloe Price is a brash, arrogant, deflective high school student. Millions of Chloe Prices exist at any time. Price’s shrugging mannerisms and affinity for graffiti cast her as typical, even cliche. That’s the surface though. Before the Storm’s award-caliber writing molds Price into an empathetic and hurting individual. Her problems, her concerns, her personality; all of it comes from an organic, real world place.

In play, Before the Storm, like Life is Strange before it, doesn’t ask anyone to feel emotion. Rather, it demands so. Crucial choices never offer a clean out. Someone is left wounded, sometimes, with lasting consequences. Nourishing character development makes decision making teeth-gritting. Consider the technology in use. Characters awkwardly stammer instead of walk. They react with limited visual emotion. Imperfect lip sync is used throughout. Yet, the scripting is so sure and pure, none of that matters. Before the Storm’s heartfelt output is potent enough to offset any technical flubs.

Over three chapters, Before the Storm plays out a morality tale concerning truth. Reality injures people, physically and mentally. There’s a toll. We lie to those we care about and love. That’s for protection, or so we convince ourselves. At its climax, Before the Storm offers an impossible two-choice conundrum. Neither answer is definitive. Either one will leave scars. It depends who takes a metaphorical bullet long term. It seems almost cruel in context. How appropriate for Before the Storm’s steadfast commitment to realism.

Together, the two Life is Strange games form a singular landmark video game. In either order, the pair feed off one another structurally. That’s brilliant work. Out of sequence, a credit cookie makes Before the Storm almost unbearable to stomach in the classiest of ways. Before the Storm refuses to give in to marketing studies. It’s the totality of what this story needs for closure, no matter the brutal truth. And truth? That’s everything Before the Storm is about.