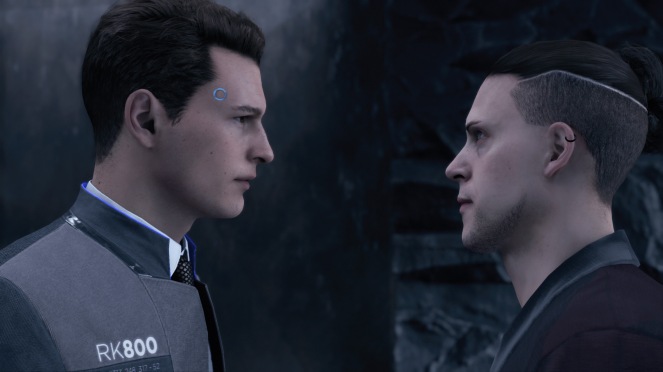 The androids of Detroit exist to serve their human masters. In case the racial allegory wasn’t clear, director David Cage makes androids sit at the back of city buses. Robots march down the streets in protest for equal rights. They speak on television, pleading with people to understand their plight. Detroit is not subtle.

Detroit spins off from the sci-fi elegance of a Phillip K. Dick or Isaac Asimov story. Detroit lacks the foresight and visions of those preeminent sci-fi greats though. This is a softer story, where the empathy lies with human-created programs, those wishing to assimilate into society. Each villain is human, and most of them cliche – an alcoholic but often lovable detective at the top.

For this to work, Detroit needs to feel authentic. It does technically. In the right circumstances, Detroit reaches uncanny valley, and does so in real time. Maybe that’s where some of the empathy is drawn from. It’s doubtful vintage sprites could elicit similar feelings.

The world though, that’s what fails Detroit. It hits the landmarks of the city – the Joe Louis monument and Spirit of Detroit statue – but it’s quite illogical. People treat androids as they do modern immigrants. “They took our jobs!” protestors shout before beating down a protagonist. These androids retail for $8000-$12000, yet become an accepted fixture in the home. Something in this economy is working if these androids exist for the middle class. Then the human element. It appears all of the racist rants and right wing paranoia fell onto the androids. There’s no human-on-human hatred anywhere in Detroit. David Cage solved racism: Just add robots.

For its wrongs though, Detroit manages a number of gut-churning story beats. Its action is sharp and compositions smart. The tug-and-pull of the story (the best of the Asimov/Dick elements) is whether those holding a controller believe in a robot rebellion. Because of the open storybook construction, it’s possible to slip into a scenario that can go either way. Cage’s method of narrative remains hampered by Cage-isms, but the interactive humps generate a potent story, if a allegorical misfire.