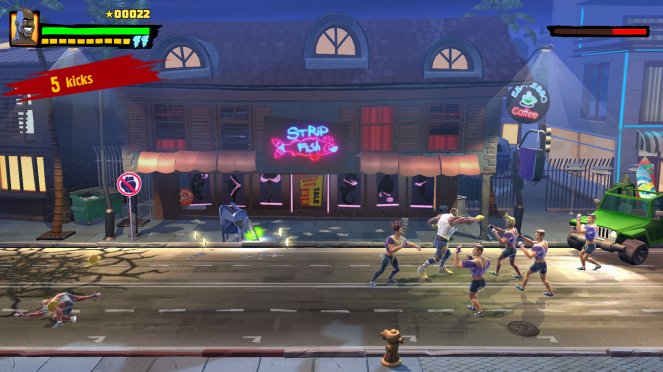 Shaq comes from a town named “Hunglow.” His mortal enemy in Yen Lo-Wang. That’s the high point of Shaq-Fu’s humor.

The rest is acidic, painful, and disgraceful. It’s homophobic, with hundreds of marching muscle men walking with a stereotypical gait. It’s racist, with both boa-wearing pimps and grape soda-spewing black men. Never even mind the plethora of embarrassing Chinese digs. Even Shaq himself can’t come to grips with his nationality.

There’s room to poke fun at Shaq. Publicly, he seems affable, and willing to rib himself. Shaq-Fu does so, an extension of himself, and partially by its existence as a reboot of a crummy ’90s fighting game. Mentions of Shaq’s Hollywood stint as Steel and Kazaam shovel his pop culture grave. A brutally poor hip-hop Shaq-Fu theme song recalls his foray into music. It’s easy to forget how penetrating O’Neal was beyond basketball in the late ’90s.

How then he ended up here, in a cruel, divisive, and outright appalling brawler? Who knows. Hip hop and kung-fu culture merge. Maybe finding another way to bridge the two appealed and he didn’t see the content. That’s too speculative though.

For corporate sponsor Icy Hot – yes, there’s a sponsor – they had to know. What advertiser doesn’t know they’re attached to? So know that Icy Hot paid money so they could push their pain relieving cream in a videogame that features a woman shoving a taco up her butt, transforming her into a bouncing demon butt who shoots flaming diarrhea at former NBA star Shaquille O’Neal. They sponsored a video game where a Paris Hilton parody uses her leashed dog as a weapon and shoots “whore-pedos.” They sponsored a game where a gay biker cartoonishly throws up anime hearts when Shaq offers to “ride” with him.

They sponsored this. All of this. In 2018. Maybe get a refund Icy Hot, which anyone who purchased this should do too.

One thought on “Shaq-Fu: A Legend Reborn (PS4)”