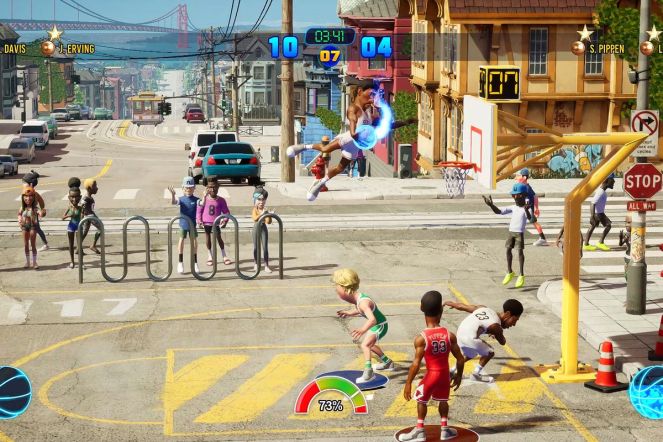 Thirty teams make up the current NBA. At the start of NBA Playgrounds 2, around eight of them offer players. The rest come from packs of virtual cards; it’s luck of the draw. In total, 400 players await unlocking in NBA Playgrounds 2. Five at a time. An hour of play will unlock the highest tier of packs – the ones holding the Steph Curry, LeBron James, and Michael Jordans of the world – that yes, hold just five random cards. Worse, each pack can contain doubles. It’s an absurd process.

Note that a $10 (not so micro) transaction can unlock everything. Then consider each player – individually – needs leveled up to reach their best attributes. That’s just as absurd.

That crushes an enjoyable two-on-two sports game, offering enough energy and enthusiasm. NBA Playgrounds 2 doesn’t reach the intensity of an NBA Jam but does separate itself with wacky deke moves and satisfying shot mechanics. The give-and-take play means hitting a simple jump shot requires finesse, appropriate to today’s league playstyle. Although three pointers tend to fall too inconsistently, the otherwise fair play systems have plenty of awareness for the sport. The color, the animation, the style, the music; all of that combines into a nice template, capuring this current era of pro basketball.

Collecting virtual cards? That’s part of the game now too thanks to Topps and others who sell digital versions of their trading cards. Seems like a swindle. Then again, Topps doesn’t ask for $30 upfront.