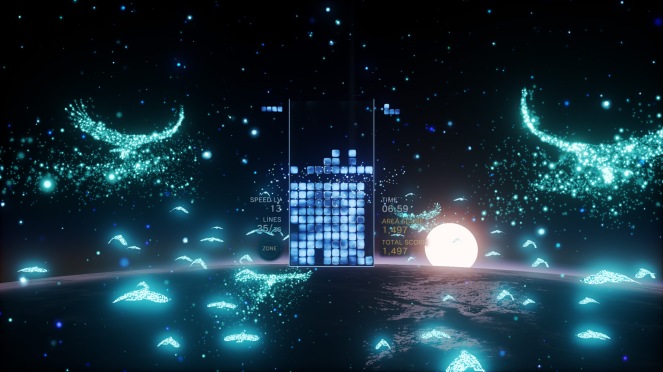 Behind the spinning brick action of Tetris Effect is a stream of lights. Random dots of representing stars, shapes, and colors. They frequently form a story. In one, Tetriminos fall as ancient travelers ride camels through a desert under a night sky. Tetris Effect soon shifts, now in an ocean as dolphins frolic and leap, then into a city flush with electrical pizazz, and finally a journey into an ethereal plane. What a journey and gorgeous story of life, more concise and rich than most of 2018’s churlish AAA output.

This isn’t window dressing. The vivid light show takes one of videogaming’s greatest strategic achievements, removes the American-added, thematic Russian dance music (and the Soviet Union-era communist motif), and then makes everything better. Tetris Effect is luxurious and bold, in natural sync with those background stories. Light flares when the Tetrimonos form and then shed a line. A piece creates an impact when locked into place. Music joyously rises, ebbs, and flows to the pace and speed. There’s genuine feel to Tetris Effect, something none of the spin-offs, sequels, or experimental takes on Tetris offered before.

Others games will grow weary with time. What is an elite technical achievement now will fall to the wayside for another short-lived technical masterpiece; we’ll all wonder how anyone played those old things. Tetris Effect is of that exquisite, elite class, a game capable of subsisting beyond its generation and all of the bits, bytes, pixels, resolution, and fidelity still to come. Tetris did that too. After all these years, it took another Tetris to unseat it.