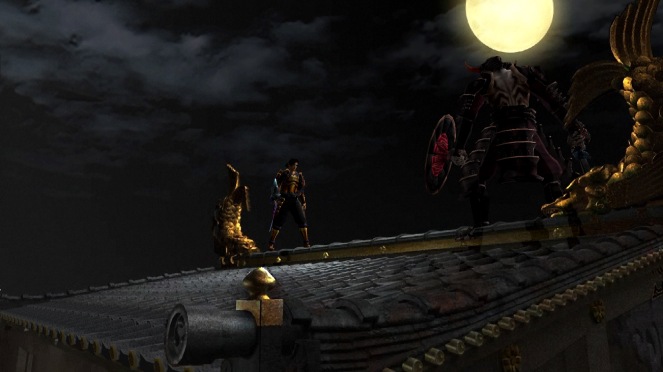 After two series in Capcom’s adventure style, Resident Evil and Dino Crisis (picked from America’s horror film litter), Onimusha took the formula to a more personal history. It’s a samurai tale, a hero rescuing a princess. But, it’s stocked with eastern depictions of demons and ghouls while set in a feudal era that re-imagines Japan’s past.

This is the story of Samanosuke, a Ronin with his own belief systems. He’s accepting of others. Japan existed an alienating country for centuries. Prior to Onimusha’s story, Samanosuke traveled the world. He preaches acceptance to a small child in a brief reprieve from the energetic sword fights against rotting undead. Onimusha establishes Samanosuke as a successful outsider, brave in his stance and willingness to break from a stringent society. It’s progressive when pointing from a Japanese social structure still fond of conforming.

Remastered here, Onimusha gains the look of an impure tapestry on which the action takes place. Its characters appear like sharp, animated toys on the backdrop of a playmat. Pre-rendered backgrounds evoke a stylistic choice though, a break from the all too-perfect aesthetics of modern polygonal construction. Also, within the static backdrops is cautious composition. At times it’s disruptive to gameplay, but keen to find sensible placement akin to iconic samurai cinema; the “camera” exists within the tight spaces afforded to these areas. When outdoors, camerawork takes in expansive views from roof-less skies. Managing to fit playable, rapid action in such confines is commendable.