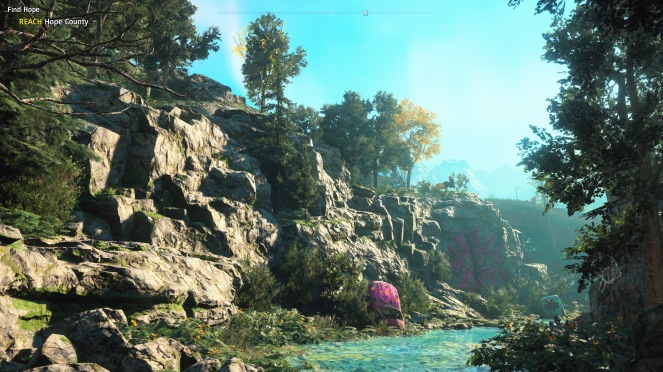 The first kill comes quick in Far Cry: New Dawn. As things go in numerous contemporary videogames, it’s a crouch, wait, pounce sequence. Doing so brings up an animation in which the victim is spun around, punched in the stomach, put in a headlock, then stabbed in the eye by scissors.

Far Cry: New Dawn is absolutely gutless. So is the rest of this series, so that’s of little surprise. The twist in New Dawn is how colorful the whole thing is, decorated by flower fields and towering pines. That’s the obvious irony – something so ugly can still happen in this place of untouched beauty. Never mind this is only 20 years on from a nuclear attack, because western entertainment continues to lessen the impact of such bombs.

The first gun of New Dawn is an orange shotgun. In perspective, it looks like a real world adaptation of the classic NES Zapper, a light gun designed as to not appear violent at all. That was meant for use in cartoon games – Wild Gunman where spaghetti western archetypes meet their fate. In New Dawn, it’s out for blood. Lots of it, too.

It’s the humor that’s at the root of Far Cry’s crassness. It doesn’t work. Walking around base camp, a resident shouts, “I fucking hate toilet paper.” This, minutes after stabbing someone’s eyeball out, or after visiting a compound where the villains kill, butcher, and eat dogs. It’s senselessly cruel. New Dawn never knows what it wants to be short of an attractively violent brawl between factions. There’s so much of that now. Playing New Dawn immediately following Metro Exodus is a sign of just how mundane these processes are. At least Exodus had the gloom. No one had fun. In the neon-laced, non-radioactive lushness of New Dawn, the playground is just that – with slaughtered dogs and eye gouging.