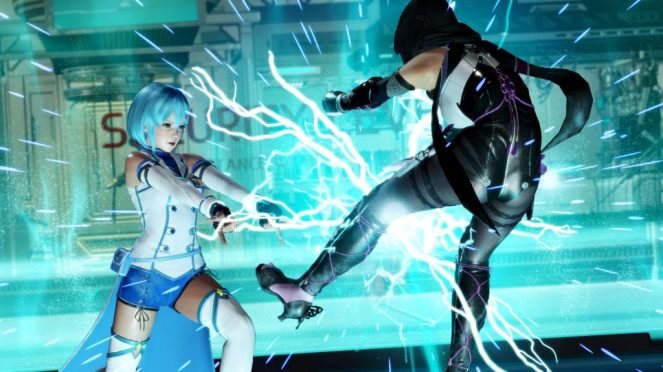 Before the start of chapter three, Dead or Alive 6 already featured a fight in a pterodactyl nest, a brawl on a pirate ship assailed by a kraken, and introduces a demon fighter. That’s before getting to the reanimated robot based on the lineage of Dead or Alive’s main ninja clan.

It’s such a bizarre franchise, built on the grounds of Japanese lore, future society sci-fi, past pop culture, and blatant fetishism. There’s a fighting tournament in there too, somewhere. Yet that core fighting masterfully captures the movement and nuance of iconic kung-fu films, creating scenes of fighting mastery even with limited knowledge of Dead or Alive’s nuance. It looks right, and even sounds right as some kicks play the “whoosh” effect common in ’70s genre films. Fighting arenas take place in crime-riddled ’80s New York, pre-war Japan, and a self-aware museum dedicated to the series. It’s a lark.

Dead or Alive is exploitative, and of many things. It’s a melting pot shoved into a blender on high, born from the mind of that rare breed – a popular, socially-agitating game designer who left developer Tecmo years ago. What remains is the memorable part of his work, the bouncing breasts of women who look ever younger as the series ages. Tecmo shows no signs of not milking that angle either with a litany of costumes to play dress-up (or really, dress down) with. That angle treats everyone as dolls, and they look the part, that or of pop idols. Yes, Dead of Alive features men, but any sensible consumer sees the attraction.

What’s a shame is how the sexism – including pitchy ninja girls running around feudal Japan settings in maids outfits – doesn’t need to be there. It’s a strikingly potent fighting game. Some new slow-motion super attacks bring an additional cringe. Bulky, muscular Bayman executes his with disturbing force. He stops mid-fight, steps backs, cracks his knuckles, then backhands a helpless female. The imagery is disturbing, and while yes, this same attack likewise aims for Bayman’s male opponents too, that scene elicits discomfort when executed on a woman who barely looks like a teen. Underneath, Dead or Alive is more than capable, sharp, fast, and cleverly simple in design. Why it still sticks to bouncing breasts and now abusive imagery is beyond tiring.