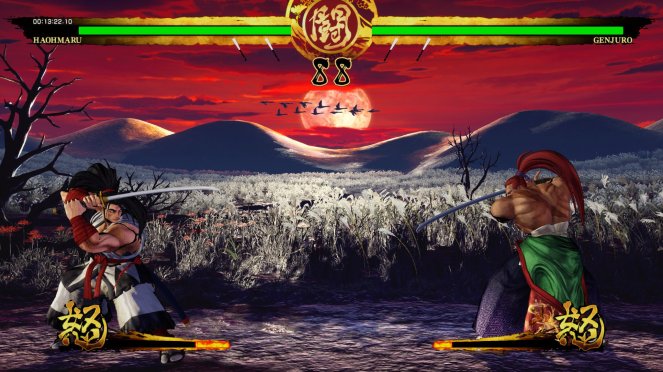 It’s hard to gauge Samurai Shodown’s tone. One moment, there’s a snappy, sarcastic ronin roaming Asian lands on the hunt for a fight. Maybe that ronin squares up to a beefy, tattooed fat man who farts on his enemies. Or Genjuro who fights shirtless to expose a scar representing his hatred. Then there’s Ukyo, somber and guarded.

Ukyo’s dying. Lung cancer, maybe. In the rebooted Samurai Shodown, Ukyo’s stage is again set on an isolated beach, only now everything is still. Water used to splash against ocean side rocks. Not now. Waves barely break, unnerving in the way they sense a kill. A Shinto shrine in the background guides someone to the afterlife.

Much as it ever was, Samurai Shodown is a game about death. Some rush towards it. Others take their time. As a fighting game (and one born among the smog of ‘90s Street Fighter II knock-offs) it’s perfect because without dialog, every character portrays their story.

Picturing the seven foot, 600 pound Earthquake in a burly bar fight doesn’t require imagination. There’s Tam Tam, sketchy in terms of a nasty, outmoded native stereotype, and unpredictable as he twirls a sword between his toes. It’s exotic style, practiced and measured. Others strike with honor like Jubei, a one-eyed samurai entering a fight without depth perception.

In style, it’s internally discordant, but there’s class. There’s purpose. There’s flair. Samurai Shodown is absolutely beautiful, introducing different perspectives on dying and the expectations for it. Some block that possibility with ego (ronin Haomaru), others seem to want their end (Jubei), and still more see murder as their job, death as punishment for a mistake (ninja Hanzo).

Note this isn’t a fighting game about a tournament. Most are. Not Samurai Shodown. It’s about eclectic people at a time of historic, social upheaval happening across one another and whether for pride, ego, or want, choose to battle with finality guaranteed for one of them. Dying is the only out, romanticized with color, aesthetics, and personality. Of this series, Samurai Shodown depicts that better than any other since the great Samurai Shodown II.