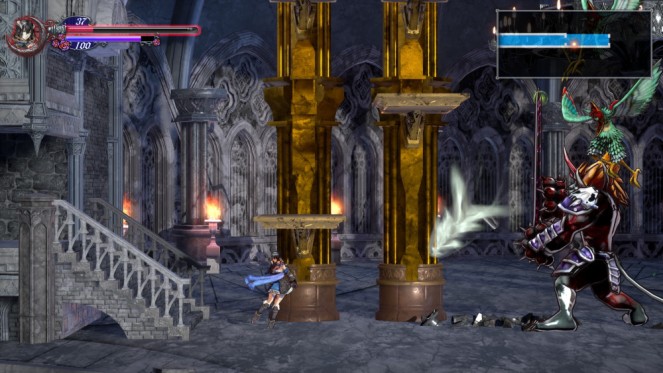 Religion interferes when the industrial revolution begins, Bloodstained’s catalyst, causing extremists to raise a Gothic castle, filled with demons. Anything to stop smokestacks from replacing churches – or, keeping things great, as conservatives see it.

A religious tome is at the center of this conflict, a war between progressives who wish to stop evil from holding society back and those who cling to the remnants of their beliefs. It’s stark for something kitschy, a game acknowledging its knock-off status by way of riffing on Castlevania’s lore. A totally-not-Dracula character and rooms borrowed from Symphony of the Night pay their toll to a classic, among other nods.

Familiarity is why people funded Bloodstained’s Kickstarter however, even if this 2D exploration genre ballooned in Castlevania’s absence. The result is something weird, surly, even cranky in terms of its stitched together coding, if the number of wonky glitches and crashes indicate anything. The obtuseness of some clues railroads pacing too.

Bloodstained doesn’t have a personality though. It’s often vague and weird, tripping up on wild anime-like fantasy as if to shield itself from the core story. A shame it doesn’t dig in its heels after the opening story prose.