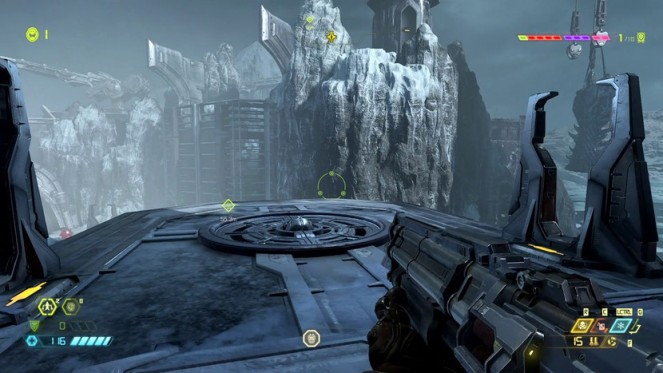 A continent-sized pentagram is charred onto America when Doom Eternal begins. More than Satanic in Doom’s context, it’s symbolic of capitalist aspirations finally conquering us all.

Much happened between Doom and Doom Eternal. That story is lost in book-length text logs hidden around levels. Evil won though, and that evil is corporate fealty. While Earth is on fire and mostly in pieces, propagandist holograms still function (and somehow, the power grid too). The commercials speak of the beauty around them, and thank those suffering for the corporate cause. Even politically correct posturing is hijacked, calling the invading demons “mortally challenged,” satirizing marketing aimed to sell products under the guise of social responsibility. Between Doom’s jello-y, giblet-laden violence, it’s beautifully ferocious in refusing surrender to equally gruesome profit-over-people exploitation.

Equally so, Doom Eternal mocks hero worship. Doom Slayer – a name that in context translates to Wall Street Slayer –  breaks into a Martian base,  the remaining workers stopping to stare in awe. This is their savior. Much as the company who caused this religious catastrophe worshiped demonic entities, so too do those hoping and praying for Doom Slayer to rescue them from this literal hellscape. Great parody reaches for extremes; that’s Doom Eternal, where the hero silently (but relentlessly so) stands as a hyper-liberal icon, and the enemies grisly, toothy conservatives who only want greater quarterly growth.

Doom Eternal is smart, if repulsively empty when removed from those themes. It’s more prequel than sequel, removing Doom from its early ‘90s Desert Storm-origins into a tiring fantasy whose lore stretches back eons. Gunplay can sustain morbid joy for so long before rockets, shotguns, and lasers turn routine, even mechanical. Pitiful narrative style is no friend to Doom Eternal either, critical context always hidden. Doom 2016 masterfully used environmental touches for exposition; Doom Eternal is more connected to heavy metal, gothic cathedrals, and ruinous Earth. That looks cool, but there’s nothing left on Earth to tell this story, making those corridors feel like what they are – shallow spaces coupled to arenas where identical shoot-outs commence.