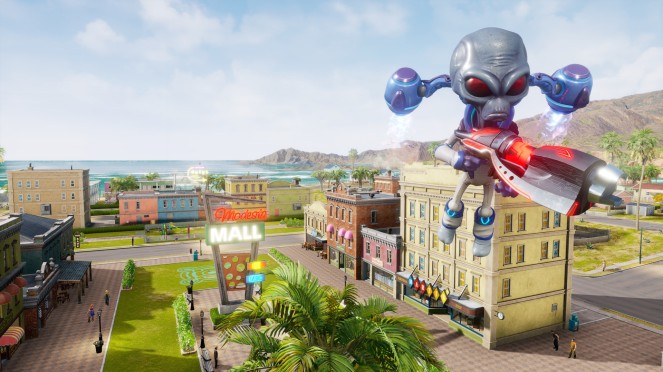 Destroy All Humans’ remaster comes, partly so, at the right time. Less a parody of ’50s sci-fi cinema than it is satire of American post-war culture, the Furon Empire’s invasion pokes holes in the “America was great” nationalist pandering. Destroy All Humans’ military is run by gun-happy dolts, small town mayors speak like JFK but think of sex romps, and befuddled redneck citizens believe every government lie no matter how preposterous. Ridiculous, yet behind the Leave it to Beaver veneer, Destroy All Humans’ depiction of paranoia, gung-ho war stances, and UFO culture isn’t far from truth.

It is occasionally funny, even if broad humor about the Red Scare isn’t inherently original. Hearing protagonist Crypto react adds a little zest though, with his Jack Nicholson sound-a-like voice and general disgust toward anything Americans do. This refresh/remaster (not a remake) changes little, leaving only a stubborn, even frustrating stealth invasion story that rarely lets Crypto act out the fun stuff. Anal probes lose their laugh value pretty quick, as do the repetitive quips from victims. This isn’t a case of being dated, so much as a game that wasn’t so engaging to begin with. Crypto found a little industry success (and sequels) but like the communist tensions he mocks, his time passed.