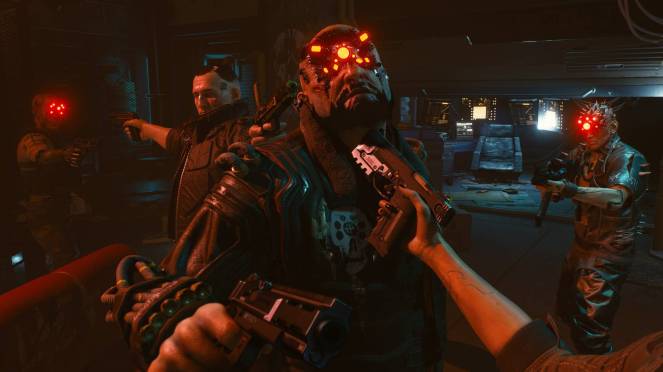 Originated in the early ’80s, the term cyberpunk (and resulting genre) rooted itself in anti-Japanese phobia, arriving in mainstream fiction as Japan became a technology-centric export economy. Cyberpunk 2077 looks the part, as does most cyberpunk. The neon signs, the noodle vendors, skyscrapers. A murder mystery too, revolving around a vicious generational divide and rebellious streak that sees an American rock star still fighting a Japanese corporation after death.

It’s hard not to see Cyberpunk 2077 as spiteful, laying blame for this dystopia on an Asian conglomerate who sold the world on robotic implants and flesh-embedded software. On the streets, people survive clustered together in isolated clans or in the shadows. TV broadcasts project an unseen world where political parties still matter; the rest live in a dystopia, born under dubious, imported, racially charged capitalism.

It’s ironic – Cyberpunk 2077 broadly condemns capitalist endeavors, brandishing an allegorical weight aimed elsewhere other than the US. Meanwhile, Cyberpunk 2077 was developed under reportedly grueling conditions, and despite the tech future its portrays, the game melts when trying to function. The little stuff like bodies stuck in geometry, an asset that doesn’t load; those seem minor. Then it crashes. And again. And again. Cyberpunk 2077 doesn’t work, and for all its effort to build a derivative play space steeped in ’80s and ’90s paranoia concerning Eastern culture, that led to the release of an indistinguishable Borderlands knock-off. That’s capitalism.