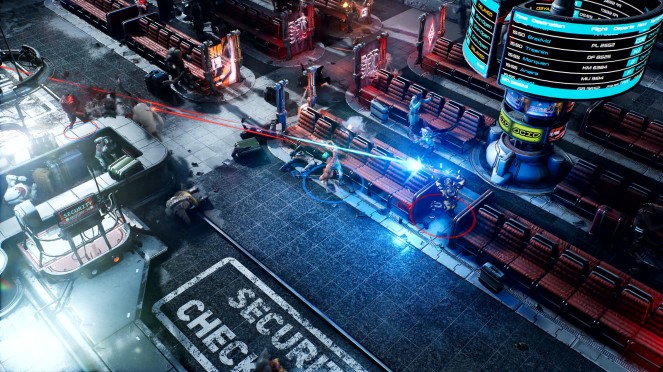 A mission late in The Ascent sends the protagonist into a nightclub, fully armed, ready to slaughter rivals in a traditional cyberpunk corporate espionage act. The nightclub is not empty – it’s the business’ prime hour. Opening fire, people scatter. They stumble, they fall. Some shout about having family. Many die in the crossfire.

The satire is how little corporations care about people; The Ascent uses that a lot. Hitting civilians will lead to an annoyed message from your employer, not about the death toll, but the work required to bury the incident.

It’s hard to watch though. The Ascent precisely mocks an American culture stuck in subservience to the rich and that treats guns as glamorous necessities. In the crowded dregs of Ascent’s lower rankings (buildings clustered to induce claustrophobia even in those not claustrophobic), people chat about their servitude to the rich. They believe they’ll one day be wealthy, but in reality, remain complacent as their corporate rulers deny them basic wages.

The Ascent isn’t particularly fresh in trashing wealth gaps and capitalist culture. It’s even quite literal. Upward mobility leads to greater success and cleaner environments. What’s different is how uncomfortably real those shoot-outs feel, even in a world filled with aliens, wild tech, and whole fantasy. The indifference to death is morbidly funny to a point, but when it’s all so easily linked to real world tragedies, the “fun” ceases to exist. It doesn’t help The Ascent seems unfinished, with clumsy mission structures, excessive backtracking, and murky, overly complex lore. Becoming a nightclub shooter is distressingly cruel.