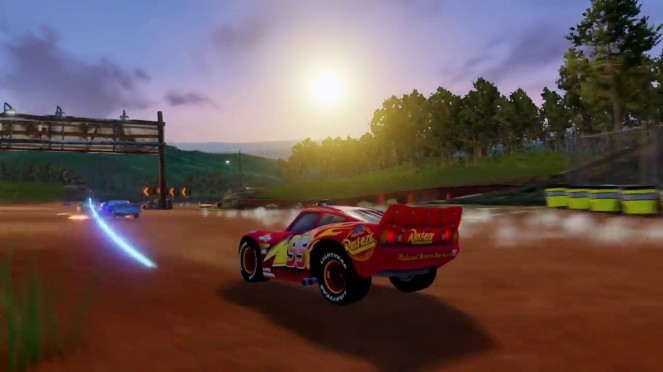 In the annals of racing games sits an oddball produced by EA titled Rumble Racing (and later, NASCAR Rumble). The idea was to take the muscle of Midway’s ’90s racing games, the antics of Beetle Adventure Racing, combined with the trick system of then darling SSX. It worked. It worked beautifully, casting out a racing videogame with vibrancy, aggression, and style. Oddly, that’s where Cars 3 comes from.

Cars 2 aped Forza Horizon. Cars 3 isn’t quite as aspirational. It’s tame and passive, leisurely in a Sunday drive type of pacing. Toned down undoubtedly for kids, yet tactical enough in its use of turbo to require player attention.

Lightning McQueen, voiced by a not-Owen Wilson Owen Wilson sound-a-like, does a Rocky routine. At least, the last Rocky where Stallone is too old to fight. In this case, McQueen is too high mileage, making one wonder if the odometer is actually a countdown clock to death in this universe. Broadcasters mock McQueen’s age, setting up a rise through the ranks, but McQueen is a… dick.

On the track, McQueen quips arrogantly, mocking his opponents for their lack of speed and how far behind they are. He’s more Cars than Cars 3. Kids will spout this stuff on the playground. It feels wrong, particularly considering the circumstances. The lines are repetitive too, spread across routine track design with passable shortcuts.

Through side-to-side slamming, ramming cars off the road is common, other vehicles complaining of the impact, but all is legal. No holds barred, destruction derby brawling – you know, for the kids. Aerial tricks defy physics, but talking cars defy logic.

Cars 3 is routine, tolerable due to a nostalgia for a game the target audience wasn’t alive for. It’s spunky if not particularly daring, but also part of the rare breed that nowadays sees release alongside a summer movie. Not many of these remain, and this feels nostalgic just for being here.