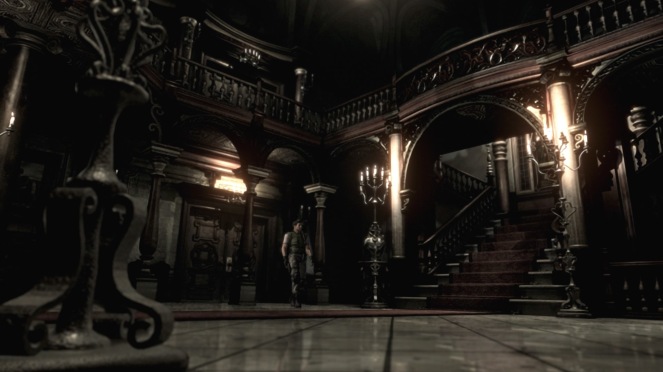 Before the series was swamped by SyFy Channel-isms of capitalism and rogue genetics, Resident Evil served as a stubborn, barely ambulatory trot through movie studio Universal’s horror canon. Via pre-rendered backgrounds, Resident Evil found art in the inactive, locking cameras into place as directors of the ’20s and ’30s were often forced to do.

Although a contemporary zombie story with contemporary horror jump scares, embedded was an intellect for cinema and an angular approach for cinematography. Derivative, yes, but trend-setting and still novel within the medium, buckled only by the urge for camp dialog.

Capcom’s incessant need to remake and repackage – seemingly done here for the bounty of nonsense paid DLC – has done favors to Resident Evil. The diminished light and addition of denser shadows shrouds the original game in a sinister framing. The Universal homage is better stamped; those steps in the mansion interior beckon for Bela Lugosi. In HD, there is a raildroading of the filmic effect – gaudy filters are laid over the low-resolution images, glassing them over with a predominantly digital veneer when Resident Evil calls for the speckled clarity of film.

Resident Evil 0 fares better aesthetically, restoration (of sorts) performed under modern standards. (Resident Evil is an uptick on the GameCube re-release.) There is a weaker game here though, one which solidified Resident Evil’s sour future which meant designs were geared entirely for their locations – Zombies in Africa. Zombies in a village. Zombies in a mansion. In 0’s case, it’s zombies on a train, a prequel besieged by the full weight of the commercial potential.

The two games pair well. Both have choppy motion and the gameplay mannerisms of a point-and-click adventure. Resident Evil 0 charges ahead on the cinematography front too. Swaying chandeliers layer the foreground with motion, while backgrounds are often inset and still. A switch to widescreen unpacks too much of these framing devices; 4×3 better instills the tightened horror – space is overvalued. The same goes for the first RE.

As equals, both games share the burden of characters, either military hunks or shapely anime stars brought into reality’s proportions. Rebecca Chamber’s smiling toughness remains grating in its attempt to appeal to a male demographic. She’s designed by focus groups. If her eyes turned round and bulged, it wouldn’t be out of place.

From an evolutionary standpoint, Resident Evil remains key. While predecessors (pick Ninja Gaiden or Golgo 13) attempted to embody pieces of cinema in their technically lightweight form, Resident Evil better set videogames on that path. It could be argued the medium has been held back in its obsession to copy rather than conquer – and all blame lies on Resident Evil.

Resident Evil 0 suffers a nasty fall. There are thrills. Ambiance is sublime as well. But the series was clearly teetering between identities, supporting an influx of action before market forces dictated the switch toward barely restrained gunplay.