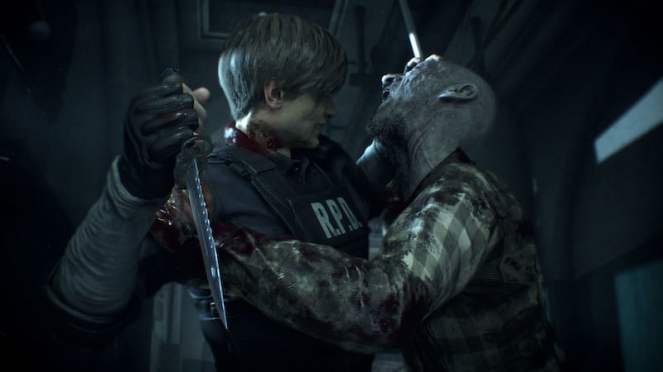 With their own police force rarely active because of limited crime (and little to no gun violence), Japanese developers of Resident Evil 2 look toward the heightened violence of western cops. It’s surreal to see American police through Eastern eyes. The fictional Racoon City police station is a towering, imposing, gothic structure. In the basement sit rotting prison cells overtaken by mold and rust like a medieval dungeon. Underneath, the popular lore of a sewer infested by an alligator. Protagonist Leon Kennedy goes nowhere without a gun drawn; his pistol is named “Matilda,” growing in length as Resident Evil 2 continues, a sort of phallic symbol of control and power. That’s wholly American.

Kennedy spends Resident Evil 2 shooting zombified people. As much as Resident Evil 2 adheres to the rules of zombie cinema, it’s certainly an absolute fantasy of police violence. It’s structured as such to successfully satirize the willingness of American police to open fire, with rewards given for headshots, not a less lethal arm or leg puncture. Zombie lore is the perfect setting.

This remake upends the relative pittance of gore from the original Resident Evil 2, escalating visuals with textural sinew and splitting skulls. Intestines end up on the ground more than inside their host. There’s no point beyond hyper violence, celebrating with glee the willingness of blue shirts to maim agitators. That certainly must baffle the Japanese equivalents who so rarely draw their guns.

Once removed from the station, Resident Evil 2 takes on its next western target – corrupted capitalism. Resident Evil’s story never stopped chewing on pharmaceutical greed; the entire series is predicated on the rogue business Umbrella trying to cover up their genetically virile virus. Resident Evil 2 builds on that, taking a chance in this remake to better tell this story – with a righteous but of satirical camp. It’s absurd and extreme, but Umbrella has their hooks into every facet of society. In the end, the rookie cop is the hero, violence or not. Corruption hadn’t yet latched onto Kennedy, just the expectation and symbolism of what America’s cops need to do to make right. Eastern society must think old west shoot-outs never left; they just changed their form.